Lately Dick Costolo (CEO @Twitter) has been vigorously advocating at various podiums (Charlie Ross Show and Online News Association Conference Awards Banquet) about the twitter API policy changes, and, to certain extend , I agree with their policy to stop encouraging developers (or hackers) to create a twitter-like experience somewhere else.

OK, now we have bought this idea, but then why is Twitter not giving users (i.e. tweeps) exactly the same experience with their various client interfaces, from iPad, iPhone, Android to web? For example, on the web they don’t have Retweet (RT) with a quote option and some mobile clients don’t have $tag hyperlinks. And then they have no analytics (for non-twitter advertising subscribers) associated, apart from number of RT and favourites.

They update everyday yet still no #share button in #fb mobile version and #rt with quote in #twitter desktop version!

Also in Michael Sippey’s (Product person @ Twitter) blog posting to introduce API changes seems to encourage developers to build something on top of Twitter such as social CRM and analytics tools, but if Twitter is really serious about that, then why don’t they take API rate limitation off, or why do they suspend accounts if you do too many @mentions?


"Twitter API rate limit for this account has been exceeded. This will be reset in 27m 45s" -_-

These limitations are the biggest hindrance in creating a meaningful conversation with tweeps. I know Twitter can argue that unlimited API usage and @mentions can cause spamming, but all marketers can agree that information overload can occur in a variety of media and can’t really can be controlled by some rate limit or usage checks! Can Twitter control spamming via API authentication and subsequent usage analysis checks? How about Twitter opening their ads API (as Google did with ad words) to developers, which would give huge opportunities for developers to create a true commerce experience on twitter! 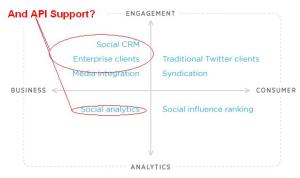 We know @twitter is free tool and they still have a more open ecosystem than FB, G+, Pintrest and LinkedIn, and if I put my developer’s hat on, it is not easy to manage (free) API usage for thousands of hackers who are hungry for the opportunity to create as many as disruptions as possible and to enjoy and prove their creative skills, but what Twitter has to realise is that the amount of content they generate every second, they cannot manage and monetise alone; therefore rather then that abundance of info go in waste, it should be open to use for developers to turn Twitter into a true social engagement system.

In the end, OK Twitter, don’t let us create a Twitter client-like experience, but, as promised, give us tool to build a Twitter analytics and relationship management system so that we both developer and Twitter can carry on growing and become the best social CRM and content management tool!

Totally buy-in @twitterapi changes but hoping them to deliver further strong support for social CRM and Analytic as promised! #newtwitter